Membranes used in VSEP systems are made of various polymers such as polyethersulfone, polyamides, and other thin film composites. Over 200 different membranes types are routinely employed in VSEP systems.

New membrane manufacturers are routinely coming on-line all around the world, and a number of exciting technological advances have been made in recent years (California is considerd by many to be the epicenter of the new membrane technology wave). Many of these advancements are aimed at increasing the capabilities of membrane separations in harsh process water and wastewater environments. For example, there are nanofiltration membranes coming out that can withstand extreme temperatures and pH ranges.Membranes are available in a variety of sizes and configurations. In VSEP systems, the membranes are affixed to a steel tray and stacked in an array, much like a traditional plate and frame configuration. (See our VSEP system components page for more information on the VSEP filter pack configuration.)

Essentially, membranes allow some things to pass through while rejecting the rest. Thus, any feed stream sent to a membrane system such as a VSEP will be split into two. These two streams are called permeate and concentrate (these are sometimes referred to as product water and retentate, respectively).

Four basic categories of membranes exist, and they are characterized as follows:

The microfilters used in VSEP systems are almost exclusively PTFE (Teflon®). Microfilters or MF membranes are used to remove small suspended solids, large colloidal material, some emulsions, and most bacteria. MF membranes do not hold back any dissolved solids.

MF membranes are especialy useful in dewatering slurries such as titanium dioxide and calcium carbonate. Initially, microfiltration applications were the focus of most VSEP applications. Teflon MF membranes are the most robust of all the membrane types; they can withstand temperatures of 130°C (266°F) and as they are chemically inert, can handle continous pH levels of 0-14. MF membrane operating pressures are usually between 30 and 100 psi (~2 to ~7 bar).

Ultrafiltration or UF membranes are used in a variety of VSEP applications where the goal is to hold back 100% of the suspended solids. UF membranes will remove large organics (over 1,000 MW) such as proteins, pyrogens, bacteria and colloids. UF membranes can be used in VSEPs to break emulsions without using chemicals.

UF membranes are robust performers and come in a wide variety of constructions. Depending on the configuration and application, UF membranes operate between 30 and 250 psi (~2 to ~14 bar). UF membranes’ upper temperature limits average around 90°C (194°F) and their pH tolerances range from 1 – 14.

Nanofiltration or NF is the newest membrane type. NF membranes are essentially “loose” reverse osmosis membranes. These semi-permeable membranes are constructed of materials such as sulfonated sulfone, polyamides, and other thin film composites.

NF membranes can be used to remove organics and many dissolved materials such as hardness. NF membranes are often used in wastewater treatment to remove BOD. NF can also be used as pretreatment to a RO VSEP or spiral RO system; the permeate from a nanofiltration membrane is a “soft” water.

In VSEP systems, RO membranes are often used to remove organics, trace oil, and trace metals in a single unit operation. RO membranes have been much maligned in the industrial context due to their high fouling potential. VSEP’s vibration mitigates this risk, thus opening the door to a huge variety of applications where removal of low molecular weight contaminants from a wastewater stream is desired.

While early reverse osmosis membranes were made of cellulose acetate, today’s RO membranes are typically constructed of proprietary thin film composites. These membranes operate at 300 to 1,000 psi (~21 to ~69 bar) and can tolerate a pH range of 2-12. 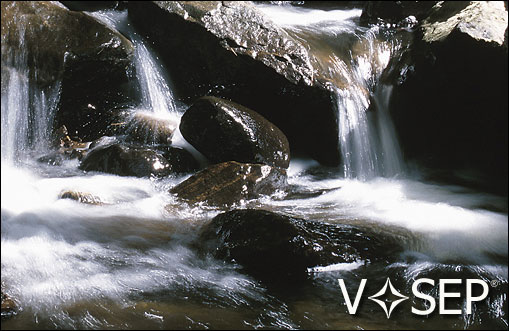