While membrane-based separations of liquids from solids have enjoyed increasing popularity over the last 20 years, the technology has an inherent Achilles heel that affects all membrane devices: fouling. This long-term loss in throughput capacity is due primarily to the formation of a boundary layer that builds up naturally on the membranes surface during the filtration process. In addition to cutting down on the flux performance of the membrane, this boundary or gel layer acts as a secondary membrane reducing the native design selectivity of the membrane in use. This inability to handle the buildup of solids has also limited the use of membranes to low-solids feed streams. 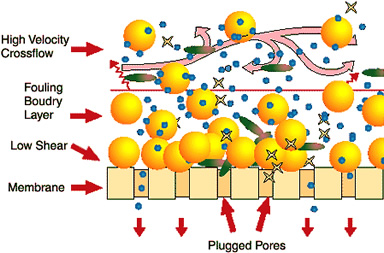 To help minimize this boundary layer buildup, membrane designers have used a method known as tangential-flow or cross-flow filtration that relies on high velocity fluid flow pumped across the membranes surface as a means of reducing the boundary layer effect. (See Figure 1) In this method, membrane elements are placed in a plate-and-frame, tubular, or spiral-wound cartridge assembly, through which the substance to be filtered (the feed stream), is pumped rapidly.

In cross-flow designs, it is not economic to create shear forces measuring more than 10-15 thousand inverse seconds, thus limiting the use of cross-flow to low-viscosity (watery) fluids. In addition, increased cross-flow velocities result in a significant pressure drop from the inlet (high pressure) to the outlet (lower pressure) end of the device, which leads to premature fouling of the membrane that creeps up the device until permeate rates drop to unacceptably low levels. 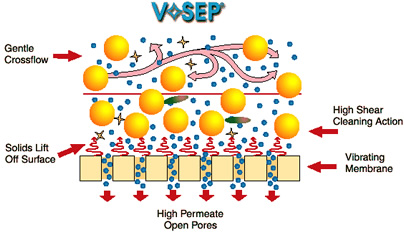 New Logic, however, has developed an alternative method for producing intense shear waves on the face of a membrane. The technique is called Vibratory Shear Enhanced Processing (VSEP). In a VSEP System, the feed slurry remains nearly stationary, moving in a leisurely, meandering flow between parallel membrane leaf elements. Shear cleaning action is created by vigorously vibrating the leaf elements in a direction tangent to the faces of the membranes. (See Figure 4)

The shear waves produced by the membrane’s vibration cause solids and foulants to be lifted off the membrane surface and remixed with the bulk material flowing through the membrane stack. This high shear processing exposes the membrane pores for maximum throughput that is typically between 3 and 10 times the throughput of conventional cross-flow systems. (See Figure 2, above)

The VSEP membrane filter pack consists of leaf elements arrayed as parallel discs and separated by gaskets. The disc stack resembles records on a record changer with membrane on each side.

The disk stack is oscillated above a torsion spring that moves the stack back and forth approximately 7/8 inches (2.22 centimeters). This motion is analogous to the agitator of a washing machine but occurs at a speed faster than that which can be perceived by the human eye. The oscillation produces a shear at the membrane surface of about 150,000 inverse seconds (equivalent to over 200 G’s of force), which is approximately ten times the shear rate of the best conventional cross-flow systems. More importantly, the shear in a VSEP System is focused at the membrane surface where it is cost effective and most useful in preventing fouling, while the bulk fluid between the membrane disks moves very little. 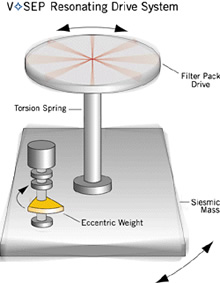 Because VSEP does not depend on feed flow induced shearing forces, the feed slurry can become extremely viscous and still be successfully dewatered. The concentrate is essentially extruded between the vibrating disc elements and exits the machine once it reaches the desired concentration level. Thus, VSEP Systems can be run in a single pass through the system, eliminating the need for costly working tanks, ancillary equipment and associated valving.

The disc pack holdup volume of a system with 1,400 ft2 (130 sq. meters) of membrane area, is less than 50 gallons (189 liters). As a result, product recovery in batch processes can be extremely high. Waste after draining the stack is less than 3 gallons (11 liters).

VSEP System Operation:
At startup, the VSEP system is fed with a slurry and the concentrate valve is closed. Permeate is produced and suspended solids in the feed are collected inside the VSEP filter pack. After a programmed time interval, valve one is opened to release the accumulated concentrated solids. The valve is then closed to allow the concentration of additional feed material. This cycle repeats indefinitely.

Membrane selection is the single most important parameter that affects the quality of the separation. Other important parameters that affect system performance are pressure, temperature, vibration amplitude, and residence time. All of these elements are optimized during testing and entered into the programmable logic controller (PLC) which controls the system.

In most cases, the filtration rate can be further improved by increasing the operating temperature. The temperature limit on a standard VSEP system is 175° F (79°C), significantly higher than competitive membrane technology. Even higher temperature constructions are also available.

The vibration amplitude and corresponding shear rate can also be varied which directly affects filtration rates. Shearing is produced by the torsion oscillation of the filter stack. Typically the stack oscillates with an amplitude of 3/4 to 1 1/4 inches (1.9 to 3.2 cm) peak to peak displacement at the rim of the stack. The oscillation frequency is approximately 53 Hz and produces a shear intensity of about 150,000 inverse seconds.

Feed residence time is set by the frequency of the opening and closing of the exit valve (valve one). The solids level in the feed increases as the feed material remains in the machine. Occasionally, a cleaner is added to the membrane stack and continued oscillation helps clean the membrane in minutes. This process can be automated and only consumes approximately 50 gallons (189 liters) of cleaning solution thus reducing cleaner disposal problems inherent with other membrane systems. 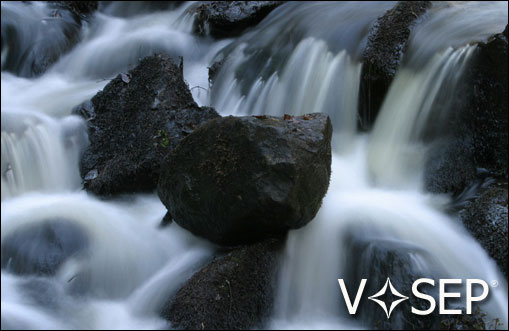