by Jeffrey Carter
The Western Producer

The transformation was achieved through VSEP, or vibratory sheer enhanced process, developed by the California firm New Logic Research. Morris and his associate, Don Goyette, have a demonstration model on loan from the company to assess the technology.

The pair, working from Bridgetown College for the firm Rondeau Anaerobic, Inc., is also assessing an anaerobic digester designed and built by Mike Verellen of Optimized Energy at Shedden, Ontario.

The two technologies can stand on their own or be used in combination. Their success will depend on the economics from a farmer’s perspective in disposing of manure and in creating energy from the methane gas from animal wastes.

From an environmental perspective, both the VSEP and anaerobic technologies have potential, Morris said. Both processes reduce the water content in manure, make transport easier and reduce the risk of environmental loading.

Morris has been a research scientist specializing in livestock production for more than 30 years. Goyette has more than 40 years of sales and promotion experience in private industry.

Verellen estimated his digester system has a payback time of seven years and he wants to drop that to five.

He said anaerobic digestion has been around for years. It’s used by some municipalities to treat urban waste. In China, there’s an estimated five million, low-tech anaerobic digesters creating energy from household wastes and livestock manure.

In North America and Europe, however, the technology is emerging in a more sophisticated form.

“With electronics and a few other innovative ideas and with the increased cost of energy, we’re able to make the economics work,” Verellen said. “We also have serious environmental concerns so everything is lined up for this technology.”

In Verellen’s system, the digestion tanks are built horizontally, rather than vertically, so they can be installed under the slatted floors of existing hog operations. It is also modular in design. A single digestion tank can handle manure from a 1,000-pig finishing barn. For larger operations, additional tanks are added.

No additional water is needed to flush the manure into the digestion tanks, Verellen said. Tank slurry is recirculated for this purpose.

The digesters, through microbial action, create methane and carbon dioxide. The gas can be used to power an internal combustion engine or turbine generator. Verellen estimated there’s enough electricity generated to power a farm with some left over to sell.

In addition, the digestion process eliminates from 95 to 97 percent of the pathogenic organisms, reduces odour, and cuts the water content of the manure by 25 to 30 percent.

“We’ve been at it for 3½ years now and we’re just getting it to the business stage. We’ve built the prototype and we’re at the college to do some testing,” Verellen said. He plans to test a commercial-sized anaerobic unit at Bridgetown and begin selling systems to farmers before the year’s end.

It is far more advanced, however. The process removes up to 80 percent of the water from manure.

The vibrating action improves the pressurized filtering efficiency and helps prevent filter clogging. In addition, when the filter is used, even the smallest virus organisms are removed, along with bacteria and organic matter.

“Our idea is if we can get it clean enough, we could recycle the water for for flushing or washing the barn or even to to recycle it through the animals,” Morris said.

A variety of filtering options are available. At the finest setting, only beneficial nutrients such as phosphorous and potash, along with a small amount of ammonia salts remain in the water, Morris said.

The nutrients could help reduce feed costs. For example, if there’s enough phosphorous in the water to reduce the need for the mineral in a swine premix feed from 8.5 to 7.5 percent, feed could be $50 a tonne cheaper, Morris said.

Morris and Goyette are working with a small demonstration model. Larger models suitable for commercial hog operations are worth about $270,000 US and are automated.

Morris said the technology seems to be reliable. Liquid manure is screened through a wire mesh before processing. Two materials emerge after processing — manure with the consistency of thick pudding and clear water.

With slightly coarser filters, greater throughput can be achieved, but there would be more impurities in the water. The level of filtration would be determined by specific farm needs.

The initial investment for a VSEP system would be substantial. But manure sales could help offset costs or even turn a profit. 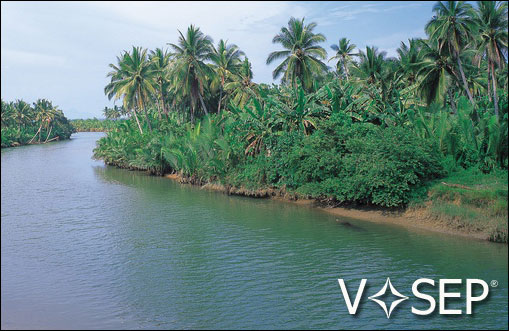