As published in the Water Desalination Report (Feb 6, 2017)

The plant, which was constructed and commissioned this past September, utilizes a state-of-the-art, 40.5 gpm (9.2 m3/hr) water purification system that consists of a primary RO and a VSEP® vibratory RO system, from California-based New Logic, Inc, to treat well water and maximize overall system recovery and achieve zero liquid discharge (ZLD) operation.

The primary RO system uses heat-sanitizable membranes and achieves an 84 percent water recovery. Although a high recovery by industry standards, Nestlé evaluated a range of brine concentration ZLD technologies to achieve additional water savings, before selecting the VSEP process. VSEP is a plate-and-frame membrane system in which a stack of parallel disc membranes is mounted within a fiberglass housing.

Concentrate from the primary RO is fed into the top of the membrane stack assembly, which is then vibrated using the torsional oscillation generated by a heavy steel mass connected to the bottom of the assembly by a steel shaft. The shaft acts like a spring and allows the displacement of the filter assembly with a peak-to-peak movement of about 0.75 inch (2cm) at a frequency of 50 times per second.

New Logic CEO Greg Johnson told WDR that the rapid movement creates high rates of membrane surface shear,disrupting the concentration polarization that would normally occur with static or crossflow membranes. This shear also limits the ability of particles and precipitated solids to adhere to the membrane surface.

“Although the recovery of the primary RO is limited due to the solubility limits of silica and calcium carbonate present in the raw water, the VSEP’s vibration allows it to concentrate the brine further, without scaling. In fact, the VSEP RO acts like a crystallizer, and allows for water recovery even after the brine has been concentrated beyond the solubility limits of the sparingly soluble salts,” noted Johnson. 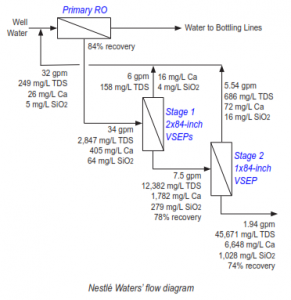 Two stages of VSEP RO operate in series, with recovery rates of 78 and 74 percent, respectively, which increases the system’s overall recovery to just over 99%.

The small volume of brine remaining is used in construction applications, resulting in the highest water yield possible. Brine discharge to the local sewage treatment plant is eliminated, resulting in a ZLD operation.

According to Nestlé Waters, “Our first responsibility is to master the management of water all along our value chain, in particular by innovating for improvements of our water use efficiency. This constant effort led us to a reduction of 20 percent of the water usage per liter of water bottled over
the past 5 years.” 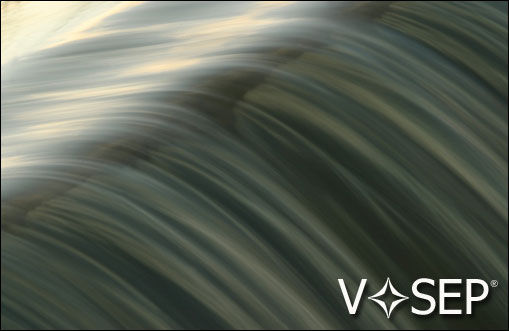