New Logic Research, Inc., the maker of VSEP, a vibratory membrane filtration system, announces it has just completed a sale of its first North American filtration system to treat Hog Manure. The system will be installed and commissioned later this summer in Alberta, Canada.

New Logic has previously installed several manure filtration systems in Korea and Japan treating both digested manure effluent and raw manure. These installations in Asia are for both Dairy Cow Manure and for Hog Manure and have been operating successfully since May of 2000.

Several companies are currently working with New Logic to incorporate the VSEP as the water treatment step in a comprehensive innovative process where methane gas is recovered and converted to electrical energy. New Logic has recently completed a licensing agreement with a Belgian company who will market and distribute the VSEP product in Europe for this purpose.

The use of VSEP reverse osmosis filtrate as a source of drinking water for pigs was recently studied at Ridgetown College, University of Guelph in Ontario Canada. In his report, Dr. James Morris concludes that there are no adverse effects on the health or growth performance of starter pigs after a prolonged study. Furthermore, Dr. Morris found that pigs during the later period of the study actually drank more of the VSEP permeate than the regular barn water. The report goes on to say, “The ability to extract water clean enough without the presence of pathogens will produce a water quality good enough for drinking water to pigs. Such a capability would offer a tremendous benefit in reducing the amount of liquid spreading and to reduce the amount of water used in swine operations.”

In a recent report, the EPA stated, “Implementation of environmental regulations can impose compliance costs on producers and reduce profits. Estimates of hog producers in the U.S. and the European Union (EU) put U.S. waste management costs at $0.40 to $3.20 per hog, which represents 1-8 percent of total hog production costs for the operations studied, higher than in previous years because of added costs of regulatory compliance.”

Regulatory restrictions are expanding on the agriculture industry, but the economic implication of regulation is a driving consideration. Requirements that are too strict and too expensive may drive agriculture to regulation havens in countries or areas with less restrictive requirements.

According to the News Observer of Raleigh North Carolina, Dr. Mike Williams, a North Carolina University official has been charged with compiling a new technology review for manure treatment. Williams has extensively investigated new manure processes and will soon be issuing a report declaring that at least one new technology that is “good enough” has been identified. However at a cost of $400 per 1000 pounds of hog weight, the price tag for the “good enough” technology is out of reach of most hog farmers.

For a 2800 head Sow operation, the estimated operating costs for the manure filtration system containing the VSEP system alone are estimated by New Logic Research to be $1.40 per finished hog. This is significantly less expensive that other innovative technologies currently being tested for Hog Manure. Use of the VSEP system would bring Concentrated Animal Farm Operations (CAFOs) into compliance with the strictest regulations and can be done at a reasonable cost within the reach of most farmers.

Greg Johnson further states, “The VSEP membrane filtration system is an automated self-contained device incorporating polymeric reverse osmosis membranes that provide the water separation. RO membranes have been used for many years for desalination and other drinking water applications. The benefits of reverse osmosis are that the filtrate will be pathogen free and the membranes are very effective on all types of dissolved solids removal and not limited to removal of one or a few contaminants.”

Studies have shown that VSEP reverse osmosis filtration with acidification of hog manure can provide water with 95% reduction in Ammonia and 98% reduction in BOD. The typical manure system will produce up to 85% of the volume as clean water suitable for reuse. Also, the volume of concentrated nutrients left over can contains solids levels as high a 15% by weight and represent a valuable organic fertilizer product that can be pelletized or shipped economically as a slurry to more distant locations where fertilizer is needed. 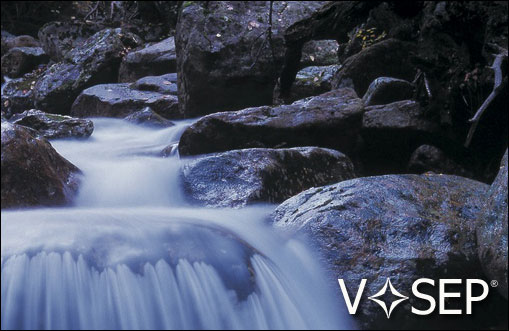