A VSEP nanofiltration system can eliminate TSS, reduce TDS by 85% and total hardness by 99% on high fouling feed water without the use and mess of a dry chemical precipitation process. Problems such as carryover due to temperature variation, clogged sprayers, flow changes and chemical control are eliminated with a membrane system.

High feed turbidity has been a limitation since the introduction of membranes. The tight spacing of spiral wound membranes means that sand, grit, organic matter and solids will cause catastrophic plugging of the membrane. The permanent nature of high turbidity fouling requires extensive pretreatment equipment in some cases doubling the capital and operating cost of a membrane treatment system. Operator workload can double during times of high feed water turbidity.

However, with the use of VSEP (Vibratory Shear Enhanced Processing), high shear rates are delivered directly to the surface of the membrane minimizing the energy requirements and the gel layer buildup while maximizing flux rates. By deriving shear from membrane movement irrespective of the fluid velocity, VSEP delivers shear 10 times that of conventional cross flow systems. Unlike conventional membrane configurations, the direction of the shear is changed at a frequency of the vibration creating over 200 G’s of force with each change in direction. Membrane disks are stacked on top of each other to make up to a 2100 ft² VSEP filter pack. The one piece membrane module can be changed out in about an hour.

The membrane module is designed and built to operate at the upper membrane temperature limit of 70C – 90C. High temperature can be used to reduce bio fouling, mineral scale and FOG. This feature increases the flux rate due to lower fluid viscosities. 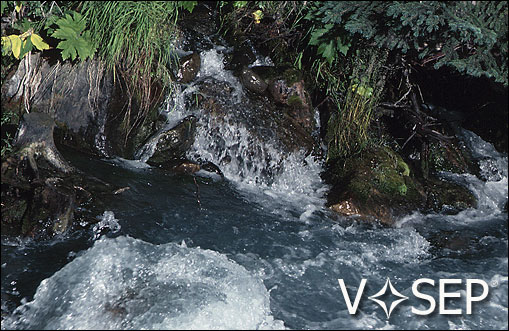